Ten days and nights sure fly by fast!  It was closing night for the Sarasota Film Festival and quite the evening.  Starting off with the red carpet at the Sarasota Opera House, there were lots of celebrities, sponsors, volunteers, supporters and of course the fabulous SFF team!

Inside the opera house the awards ceremony took place at around 6pm, followed by the Rory Kennedy and Mark Bailey film, “Above and Beyond Nasa’s Journey to Tomorrow”.  The film was fabulous.  I learned so many new things about NASA and how they have affected our everyday lives.  After the closing night film, Rory and Mark were on hand for a Q & A session. 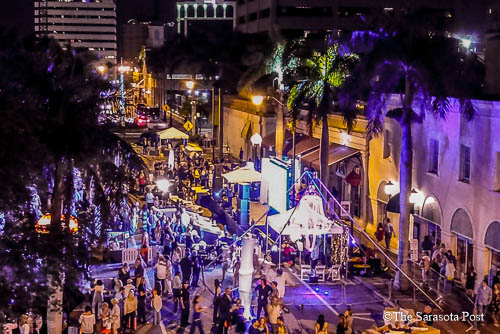 We walked out of the historic opera house and the party began!  Selby Five Points Park transformed into “Chill Under the Stars”, a huge outdoor lounge that included a Brazilian Samba Parade, awesome fashion show, live music and so much fun.

Our team at Sande Caplin and Associates and The Sarasota Post were so honored to be a part of this year’s Sarasota Film Festival.   Congratulations to President Mark Famiglio, Associate Festival Director, Erin Murphy and the entire festival team and of course the hundreds of volunteers.  Without you, the festival would not be the huge success that it was.