Todd Rundgren came to St. Pete armed with a vast musical arsenal bringing his “Individualist” tour to the Florida Toddheads. The tour is named after Todd’s new autobiographical book called The Individualist – Digressions, Dreams and Dissertations. It is a look at Todd’s personal & professional life experiences.

An interesting life, it is two days before his 71st birthday! Rundgren is the product of the musical 50’s and 60’s. A Philly boy, Todd grew up influenced by the music of the Philadelphia sound “TSOP” and the writings of such hitmakers like Gamble & Huff, as well as the Beatles. Don’t forget Todd tours frequently with Ringo and his All-Star Band. Todd became a musical innovator of his generation, producing some of the biggest albums by artists like Cheap Trick, Patti Smith and Badfinger. Todd also created the first music video long before there was MTV.

Todd’s own music solo and with his band Utopia has always been cutting edge and provocative, but he also has a library of great, soulful, catchy love songs that made it on top ten radio. Some Todd tours over the years have been new music that Todd is promoting and has left the general public disappointed not hearing “the hits”. This is NOT that tour! Todd brings them all and then some! The third song in was 1972’s hit, “Hello it’s Me” which started the first of a night of standing ovations! Going back to his first solo album “Runt”, “We Gotta Get You A Woman” had the crowd on their feet! Going way back there was a Nazz tune thrown in the mix as well. “I Saw the Light” and “It Wouldn’t Have Made Any Difference” from the classic acclaimed album, “Something/Anything”, double record which is on the list of Rolling Stone’s top 500 albums. There were several tunes from the Faithful album including the rocker “Black & White” and the anthem “Love of the Common Man”. 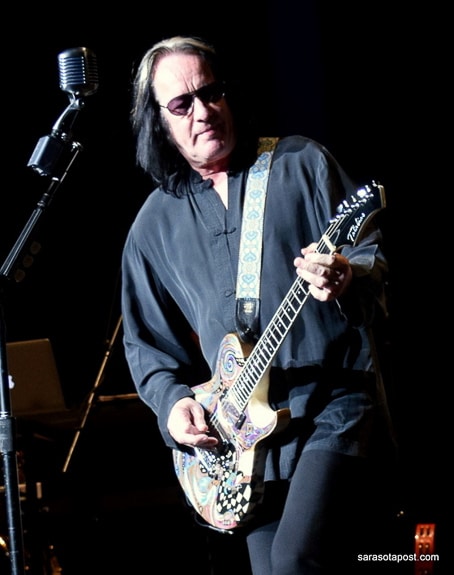 This writer’s hope to hear “The Verb to Love” were dashed, in my opinion one of Todd’s greatest masterpieces. Mr. Rundgren made up for it by bringing some deep cuts from one of his best, the “Initiation” album. “Real Man” and “The Death of Rock & Roll” were on the set list but, the big surprises were “Eastern Intrigue” and the rarely heard live genius of “Fair Warning” that includes the lyrics, “When you lay your life down in them grooves, you are bound to get scratched up sometime” a musical metaphor about life. 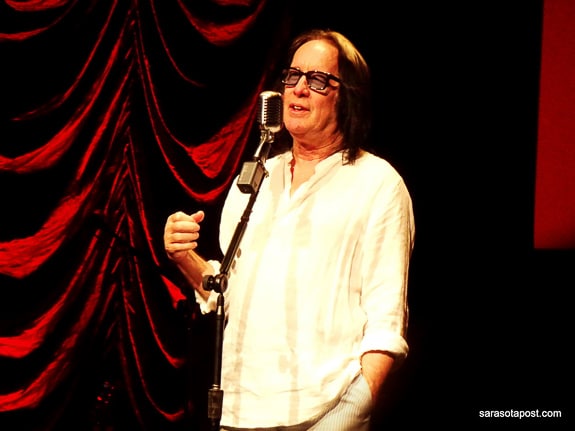 After a short intermission, Todd returned to the stage for a Q&A. Audience members were asked prior to the show to submit questions to Todd via video. Questions ranged from asking Todd what he would do if he were President to who would he like to be in a band with. His answer was that he would like to be in a band with The Who’s Pete Townsend. A fun Interactive part of the show. Back to the music was the title song “The Individualist”. No one but the best musicians work with Todd. They include longtime Utopia member Kasim Sulton on bass, Prairie Prince of the Tubes fame on drums, Greg Hawkes on keys who was a founding member of The Cars, Jesse Gress on guitar and Bobby Strickland working the horn section. The band has their own fans yelling out to them in between songs. Another song highlight was “Want of a Nail” from the “Nearly Human” album. An R&B tune which featured the great Bobby Womack on the original recording, Todd hit the high notes and sounded fantastic.

The Individualist show is a great journey through Todd’s musical life from the beginning, the hits and the continuum of today. Those people who want to hear the radio hits get their wish and diehard fans get deep cuts! Everyone gets one of the best shows from one of this generation’s most prolific musicians!