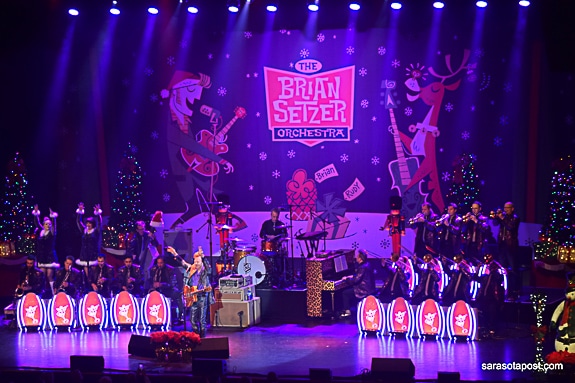 Stray Cat Brian Setzer and his Orchestra Rock Clearwater Inside Out

It’s been 15 years since Brian Setzer and his orchestra started bringing his rockin’ Christmas show to audiences during the holiday tour season.  It is one of the most popular Christmas shows around the country. A fun, upbeat time where fans dress up in their yuletide best which means everything from lights, to tinsel and crazy Christmas sweaters!  There were many of those at Ruth Eckerd Hall in Clearwater on Wednesday night!

Opening the show with “Dig that Crazy Santa Claus” and “Rockin’ around the Christmas Tree” the party was in full swing! The stage is decorated with a barrage of trees and poinsettias with statues of St. Nick on one side of the stage and a snowman on the other.  Setzer is playing one of his signature Gretsch guitars, while sliding back and forth in front of the orchestra. Ever the Stray Cat, he has kept the rockabilly genre alive and well. It will be the 40th anniversary of the Stray Cats in 2019 and they will be headlining the Azkena Rock Festival in June.  Brian just recently was on “The Big Interview” with Dan Rather on AXS-TV and you can catch it On Demand or a repeat episode.

Setzer’s setlist is a mix of classics and rockabilly holiday tunes like “Boogie Woogie Santa Claus” and “Here Comes Santa Claus” (Right Down Santa Claus Lane).  He doesn’t forget his Stray Cat roots either, “Stray Cat Strut”, the fun and sexy “Fishnet Stockings” and of course, that big hit “Rock This Town”, have people out of their seats! The mixed audience of the 80’s MTV crowd, rockabilly fans and holiday partiers mesh together in their love of Setzer and his music. There is a tribute to the late great guitarist and country artist Roy Clark.

Brian and the orchestra have a new DVD out called “Christmas Rocks! Live” with many of the tunes played in the show and one of the highlights is the “Nutcracker Suite” which is simply awesome to see and hear! If you can’t catch a show, this is the next best thing to being there! The tour is on the road until December 22, 2018 including a stop in Orlando on Friday night at the Hard Rock Live! If you haven’t seen this show and it is headed to your town, don’t miss it! It is one of the joys of the Christmas season!

Opening the show is Lara Hope and the Arc-Tones who get the crowd in the mood with their brand of rockabilly tunes. Winner of the 2017 Ameripolitan Music Award for Best Rockabilly Female and named Best Up and Coming Band, they are a perfect opener for Brian and fans of rockabilly!