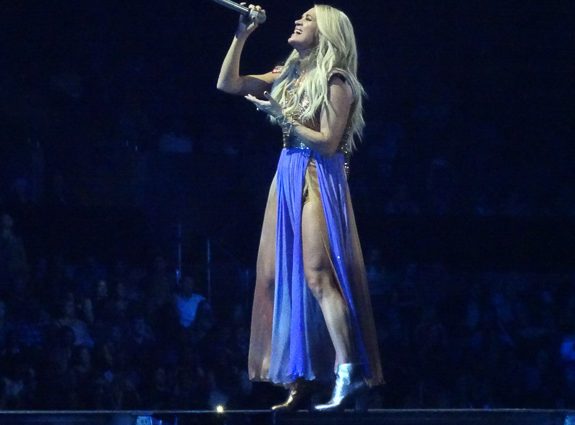 Carrie Underwood Cries Pretty in L.A. at the Staples Center

Sarasota/Bradenton’s Vicky Sullivan of The Sarasota Post is out in Los Angeles, CA and had the opportunity to see Carrie Underwood’s concert and wrote this fabulous review.

Country music princess Carrie Underwood became a star before America’s eyes as the winner of the 2004 season of American Idol! Since then, she has become a force in female country music! Her new  Cry Pretty Tour 360 proves that she is at the top of her game! A stage that allows Carrie to be closer to the fans. It is similar to her “Storytellers” tour stage but amped up a few notches! Using hydraulic stages to lift Carrie and her band above the crowd for closer fan view and bringing it to another level!

The sold-out crowd at the Los Angeles Staples Center were at a frenzied pitch when she took the stage opening with a triple shot of high energy country with “Southbound”, “Cowboy Casanova” and “Good Girl”! On their feet, screaming for their Idol, most of the audience was female along with tag along dates, kids, moms and some single guys there to check out the beautiful Carrie! Grown women were screaming for Underwood reminiscent of a boy band concert. Clearly Carrie knows her audience and talks to them accordingly. 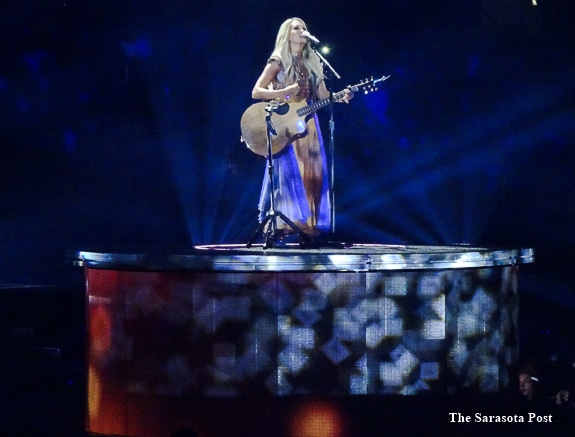 Female empowerment is a theme of the tour with opening acts “Runaway Jane” and “Maddie & Tae” joining her onstage for a medley salute to female country superstars who included Dolly Parton with “9 to 5”, Loretta’s “Coal Miners Daughter” and the generation that came before her with Shania’s “Feel Like a Woman”, a highlight of the show! There is a heartwarming video tribute of Carrie’s family with photos running across the screen of her husband Mike Fisher, sons Isaiah and new baby Jacob, which allows for Carrie to make one of several costume changes.

There is Carrie’s great band, stellar light show, big screen graphics, a touch of pyro and smoke but, make no mistake, the star of the show is the magnificent voice of Underwood! Not one bad note, some great runs and notes held ‘til she had no breath left. A mashup of “Just A Dream” and Aerosmith’s “Dream On” should make Aero frontman and Carrie’s former CMA’s duet partner proud as she hit those high notes. A medley of Carrie’s early hits included a favorite of this writer, “Temporary Home”, from her 2009 “Play On” album. A beautifully crafted story full of emotional pictures everyone can relate to in one way or another. 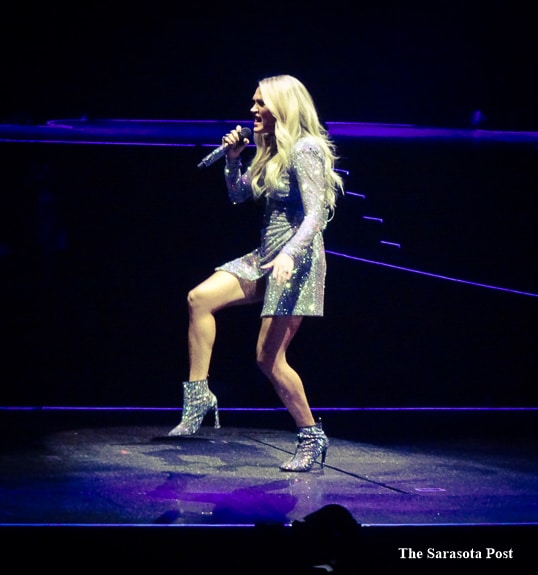 Big show stoppers included the first big Carrie hit in 2005 “Jesus Take the Wheel”, “Blown Away” with fantastic lighting and sound effects, “In the Water” and that song about a Louisville Slugger which had everyone in the Staples Center singing along in fun, animated fashion to “Before He Cheats”!

Carrie also took a turn on several instruments including acoustic guitar, drums, piano and electric guitar. During her hit “The Champion” she brought out a cancer survivor who had used the song as motivation to get through treatment and is cancer free! A triumphant moment for all.

Carrie honored Los Angeles as her first home away from home doing Idol and how much it means to her. She talked about her hometown and that her parents still live there, joking they have added a couple of stop lights. Underwood is the real deal. Her star power is gigantic but she is still a small town girl.

The encore is one of the best parts of the show! Underwood is beneath the stage putting on her “Cry Pretty” makeup herself, live on camera and then rises up on stage to perform the title track in a whirlwind of color! She closes the show on a positive note with the hopeful “Love Wins”. Everybody won seeing this show! Check out full set list at setlist.fm.

For Florida fans, the “Cry Pretty” tour is making a stop in Jacksonville on October 20th at the VyStar Veterans Memorial Arena.