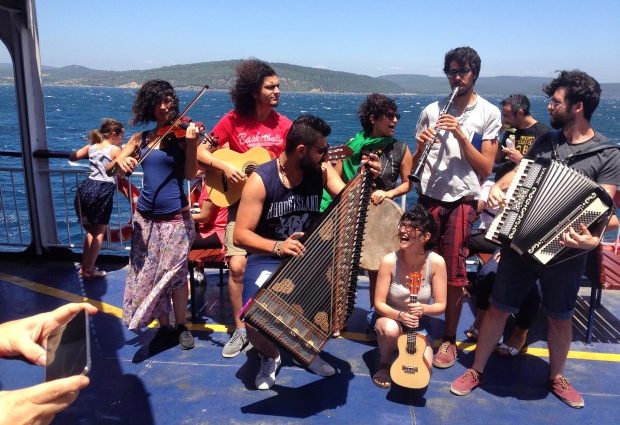 American Country Music with an Arabic Twist In Sarasota, Florida

By: David Beaton
In: Music
Tagged: Country for Syria, WSLR

Country for Syria is an Istanbul-based international musical collective with members hailing form the US, Syria, Turkey, the Czech Republic and France.  They blend Middle Eastern folk music with American Country music and work to raise money for, and show solidarity with, Syrian refugees and those affected by conflict around the world.  Their first US tour will bring them to the Fogartyville Community Media and Arts Center on Saturday, October 29th at 8pm.  Tickets are $10 in advance and $12 day of show.  Advance tickets are available at www.wslr.org.

Country music has its origins in the American Civil War. Now Syria is in the midst of its own civil war. Their music draws parallels between the musical and lyrical themes of Middle Eastern and American Country music to connect personal experiences of conflict and migration from around the world. Both the Country and Arabic musical traditions share themes of migration, love, loneliness, longing for home, patriotism, faith, and relationship to place. Both tell stories through narrative ballads, through pastoral meditations, by praising folk heroes and through the idealization of a lost way of life.

Country for Syria’s musical mission here in the US is one of cultural diplomacy and mutual aid. While in today’s climate, Middle Eastern and American cultures are often seen to as polar opposites, Country for Syria seeks to break down those stereotypes through their music, showing how much we really have in common. Money raised at benefit concerts goes to refugees and people affected by the conflict. They do this by providing money directly to refugees, and by playing shows whose proceeds go to organizations whose mission is to help those affected by the conflict. They partner with organizations such as Small Projects Istanbul, Humanwire, Ad Dar Center, and Clowns Without Borders. The band also makes regular trips to refugee camps and conflict areas to deliver supplies and donations while playing concerts in solidarity.