Did You Know We Have A Roller Derby Team In Bradenton, FL?

Sarah Bikos is 37 years old and has been the Director of Social Media for a local marketing agency and teaching theater to teenagers one day a week for Drama Kids for 11 years.

At least, that’s what she does for a living. But the real Sarah Bikos is roller derby player “Dita Von Cheats!”

How does one get into Roller Derby? Well, in Sarah’s case, she was working in Hot Topic about 11 years ago when roller derby players would come in to get their awesome looking outfits. They kept asking her to come play but, she was concerned about getting hurt and that it would keep her from doing her other job which was dancing. However, when her mom died, she changed her way of thinking and really needed to feel empowered. Roller Derby does that. 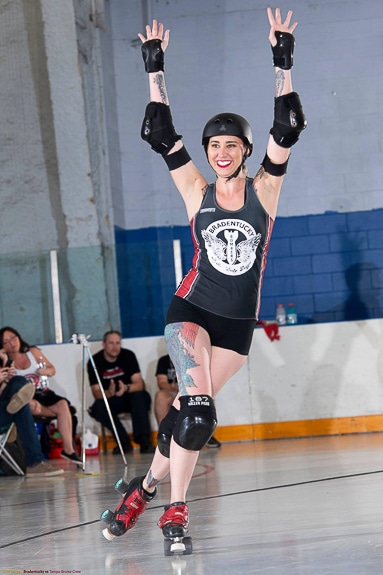 The team feels like a group of sisters to her. They are 30 members aged 18 to 55 and they get together often. They practice for 2 hours, 3 times a week, at the Ellenton Ice and Sports Complex. Every other Saturday they practice for 2 ½ hours! They still practice during the months they don’t have games, although they take some time off for the holidays 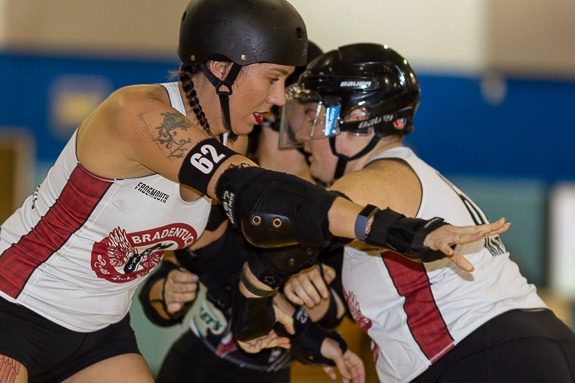 The games run from March to October and they play 2 games a month. That amounts to about 20 games a season split between 2 teams: The A team, which is the Charter Professional Team, and the B team, which is a recreational team. All the women pay for their own gear, travel expenses, etc. out of their own pocket. Just for the love of the game!

The Charter Professional team (Bradentucky Bombers) is part of the Women’s Flat Track Derby Association (WFTDA), a professional sports association. The team travels around the country playing tournaments for ranking. The Bradentucky Bombers joined this group just this year They have travelled as far north as VA and as far west as AL. 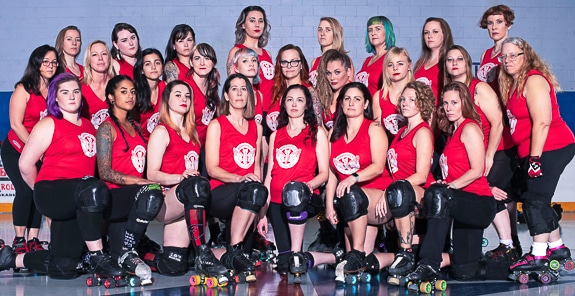 Even though Sarah has experienced some injuries (a broken ankle, dislocated hip, broken finger, bruises) she loves this game and the camaraderie of her teammates. You’re invited to join. You don’t need experience, but you do need to be willing to learn. You can contact them at info@bradentuckybombers.com.

Photos from Sarah Bikos and The Bradentucky Bombers