You are viewing: The Suncoast Post > Great Reading > Bob Slicker, GM of the Swordfish Grill and Tiki- Always Striving to be #1 Bob Slicker, GM of the Swordfish Grill and Tiki- Always Striving to be #1

Written by Sande Caplin on December 8, 2017. Posted in Great Reading.

For those of you who have been to the Swordfish Grill and Tiki in Cortez, Fl you have probably met General Manager, Bob Slicker. He’s the guy with the big smile on his face welcoming customers, helping his servers, pouring drinks- you know everything that a GM has to do. But, Bob takes it to another level. He is the best of the best.

I have known Bob for several years. When he was tending bar at the Swordfish it was just a kind of “hi, how are yah” type of thing! Then, it all changed with one phone calI. Four years ago, this October, my phone rang, and he introduced himself on the phone. “I don’t know if we’ve ever met, I am Bob Slicker and I am the new General Manager of the Swordfish Grill. Can you come down to the restaurant this morning, so we can chat?” I said “sure” thinking that bad news was coming. Our company had built a website for the Swordfish and I figured our relationship would be coming to an end with new management. Quite the contrary!

I got to the office and Bob explained that he was now the man in charge! He liked our website and heard some good stuff about our company. On top of that, we were one of the few companies that were “paid in full” so he figured he would keep us on and see how we do. He also said, “if you stick with me, great things will happen”! Well, the rest is as they say, “history”! 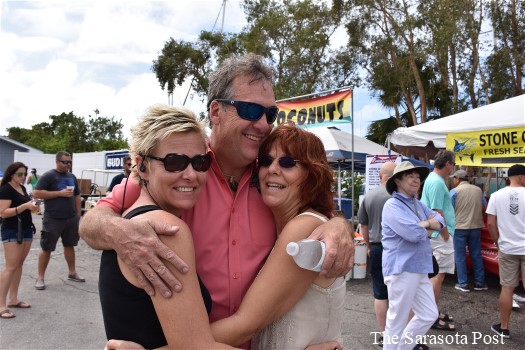 Four years later the place is thriving and is one of the hottest restaurants on the Suncoast. Bob is a tireless worker who never stops. We were bonded at the hip throwing around ideas, talking social media and last year he asked us to develop a brand-new website for the Swordfish! Music 9 times a week, Crab Racing on Tuesday nights, the “Extravaganza” on Wednesday nights, Thursday night Blues Jam, Sunday “All You Can Eat” …… and some of the best bands in town.

With the “season” here everyone wants to eat, drink and play at the Swordfish. Bob being the 2nd best social media person in town (ask Bob who is #1) it’s hard to figure what crazy idea he will come up with next. And, no one is more charitable then Bob and the best crew in the world at the Swordfish. The biggest event is the annual “Giving Back” charity event. This year over $20,0000 was raised for local charity, “The Blessing Bags Project”. The Swordfish team is involved with many other charitable events throughout the year. In a couple of weeks Santa will be coming to the Swordfish to give out gifts to homeless kids.

Bob is not only a great businessman, he is a wonderful friend. Last July, Bob and his very special lady Kat came to New York to attend my daughter’s wedding. Well, all I can say is that it was 5 days and nights that I will never forget. No one has more fun than Bob. The “big apple” will never be the same.

So, if you’re a “regular” at the Swordfish Grill you know how great a place it is. If you haven’t been there before…. you must go. Ask for Bob and tell him you read about how great he is in the Sarasota Post. Stumble Creek & The Wandering Hours at Fogartyville in Sarasota Done With The Gun