48 Hours in New York City During the 4th of July

As a small child I grew up in northern Indiana and the 4th of July was a big deal in the late 60’s! Our town had a big parade that I twirled baton in when I was 9 years old. There were floats and marching bands. Picnics and BBQ’s were part of the tradition of the holiday. It was a special day to celebrate our country. Since moving to Sarasota when I was 12, I have celebrated July 4th at the Lido Beach boat races, fireworks at the Palmetto green bridge, Sarasota’s Marina Jack and at the Beach House restaurant on Bradenton Beach. Home is always fun but I wanted to do something different this year.

This year I decided I wanted to travel for a couple of days to my favorite city, New York! Besides Washington DC, New York is a great place to celebrate our nation’s birthday. July 4th is a good time to visit NYC because a lot of New Yorkers leave town to go to the shore or the country and it is quiet around Manhattan for the most part. Flights were cheap and hotel prices down. Planning ahead is helpful for what you want to do and see.

I started with a cruise to visit the Lady Liberty! She is one of my most favorite sights to see anytime. The cruise I went on was a one hour tour from the south seaport Pier 16 around the Hudson viewing the Brooklyn Bridge, Manhattan skyline, the Freedom Tower and of course the Statue of Liberty. This cruise is not the one you want if you plan on getting off and walking around the statue. You have to take the official Statue Cruises for that, located in Battery Park, but if you would like just a leisurely ride around the river, then this is for you! They are revitalizing the South Seaport with restaurants and shops and a new Pier 17 that has national concerts. Country music superstar Carrie Underwood kicked off the opening on July 4th! 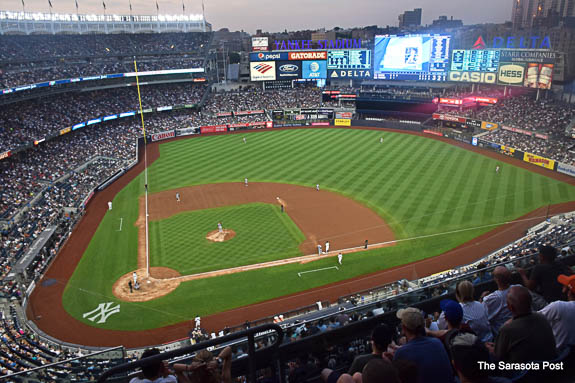 My next stop was Yankee Stadium in the Bronx! Just tell them you need to get to 161st street and any New Yorker can tell you how to get there! The subway comes right into Gate 6 at the Hard Rock Café for the party and the NYY Steakhouse for upscale dining. The Hard Rock was super-packed and full of great musical memorabilia! I headed to my nosebleed seat in Section 417, which had a great view of home plate and some real die hard Yankees fans doing the Yankee clap. Yankee Stadium is a fun experience for a baseball fan whether you are a Yankees fan or not. You can do a tour of the stadium prior to game time, a great way to learn some Yank history. Baseball foodies are in heaven with the zillion choices of food. Speaking of food…. 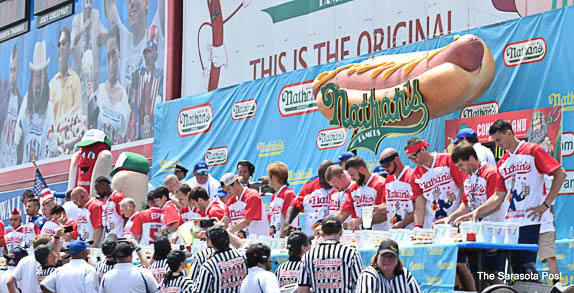 I took the subway out to Coney Island for the 102nd Annual Nathan’s Hot Dog Eating Contest! An hour ride from Manhattan, I arrived to some 50,000 people there to watch this bizarre but fun New York July 4th tradition, which has now become an American institution airing on ESPN like a sporting event! I guess in a way it is! There are big screens for the crowds to watch who can’t see the actual event which is held next to the Nathan’s Hot Dog stand on the strip. Coney Island has grown with more restaurants, some new like the Wahlburgers owned by movie star Mark Wahlberg and his family, along with some New York institutions like Grimaldi’s Pizza. There are the claw machines, soft ice cream and the giant roller coaster, The Cyclone, all for which Coney Island is famous! For the 11th year in a row the winner of the Nathan’s contest was Joey Chestnut! Eating 74 hot dogs and buns in 10 minutes! Joey wins $10,000.00, the trophy and belt! I am sure he will be back next year to defend his title! 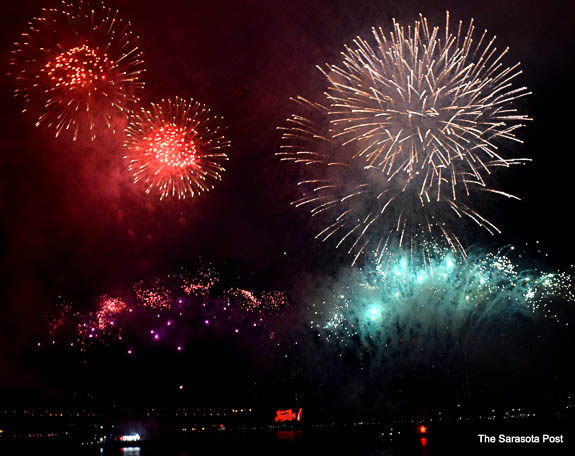 Heading back into Manhattan for the annual Macy’s Fourth of July Fireworks! There are five barges out in the East River to shoot off the fireworks to hundreds of thousands who line FDR Drive from 23rd to 42nd streets, as well as New Jersey on the other side of the river and Long Island City who all have a view. I was at 34th Street and FDR. There were rooftop parties going on, boats all around the east river, you could take a dinner fireworks cruise around the river for anywhere from $200-$500, depending on how much you want to impress your date! There was an announcer as well as synchronized music with the fireworks which were being aired on TV for the rest of the country to watch. Kelly Clarkson did a great version of “God Bless America” that had everyone talking afterward! The fireworks lasted about 25 minutes in real time. 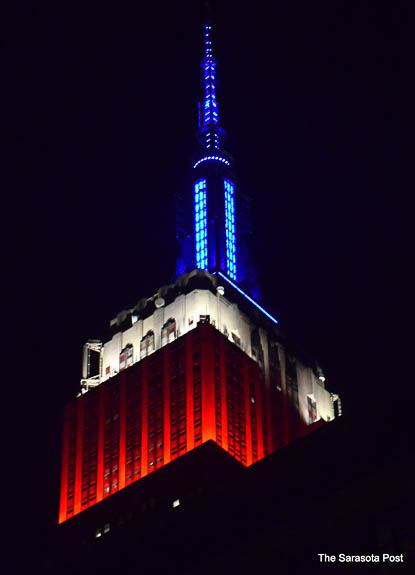 Everyone is having fun, taking selfies and pictures of each other, singing along! It reminded me of when I was that kid in the parade – I loved the 4th of July! For a little while in the melting pot of the U.S., everyone was there for the same reason, to celebrate the love of our country! On my way back, the Empire State Building was lit up in red, white and blue! Thanks New York for a great July 4th, 2018!