Written by Jodi Schwarzenbach on April 29, 2019. Posted in Events.

The great Dick Vitale is a “space-eating blender.” He is a “P.T.P”. who “brings a W” to every venture he touches. He is a “surf and turfer,” the “key,” and a “human spaceship.” If you’re a fan, and so many of us are, then you know I’ve touched upon just a fragment of the Dick Vitale-isms that we’ve grown to love.

As excited words flowed from one of the most influential sports broadcasters of all time, millions of fans became entranced with Dick Vitale. Throughout the decades he has coached and commented on the best athletes and games of our generation. Filled with gratitude and always giving back, Dick Vitale has taught us how to succeed in life on and off the court.

Hailing from Michigan, I was familiar with Dick Vitale’s amazing stint at the University of Detroit and his run at the helm of the Detroit Pistons. It was with a bit of anxiety that I waited for his call to come in for our interview, but my nerves went out the window as soon as I heard, “Jodi, this is Dick Vitale.” I felt like I was settling in for a great courtside game. Always the announcer, this Hall of Famer did not want to spend any time discussing his multitude of accomplishments. Instead, he filled me in on why his passions run deep for the innocent victims of pediatric cancer. 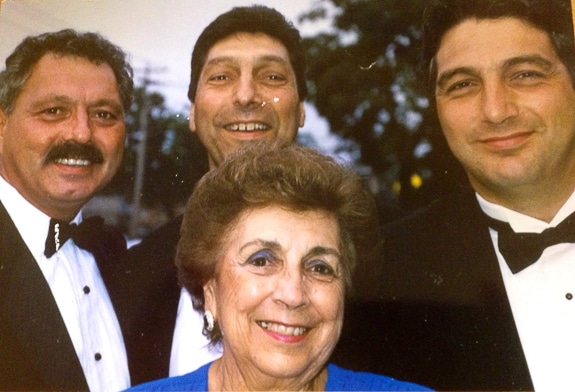 Cancer is frightening and awful in any setting but is particularly menacing when it strikes children. And yet, only 4% of federal research funding is applied to pediatric cancer. Daily, 43 new diagnoses of cancer are laid heavily upon innocent children, unaware of what lies ahead or what the word even means. But, their parents listen to doctors dolling out what may amount to a death script for their child, helpless to protect those they have created. Looking for credible assistance and researching the latest medical advances indelibly leads to learning about the V Foundation. Founded in 1993 by basketball coach Jim Valvano along with ESPN for the sole purpose of achieving Victory over Cancer, the V Foundation has become one of the leading donors to those making the greatest strides against cancer. Dick Vitale, who sits on the Board of Directors for the V Foundation and is a passionate supporter, cites spending time with the families affected by pediatric cancer as even more touching than when he received a Lifetime Achievement award from ESPN.

Each year the endeavors of the V Foundation have supported the most cutting-edge efforts to end cancer. To date they have awarded over $225 million in research grants and are one of a handful of charities that donates every penny earned directly toward their intended recipient. You can rest-assured that if you donate $20 to the V Foundation, you are not covering any of their administrative or operating expenses. Thanks to a generous donor, all of those type expenses are covered by an endowment so, your donation packs a full punch whether it be $20 or $20,000. To hear Dick Vitale speak of children with whom he has spent tender moments and who have lost their lives to pediatric cancer puts into perspective his love and respect for these families. He spoke warmly about Tony Colton, a Sarasota teenager with whom he became great friends with before Tony’s untimely death at the hands of pediatric cancer. 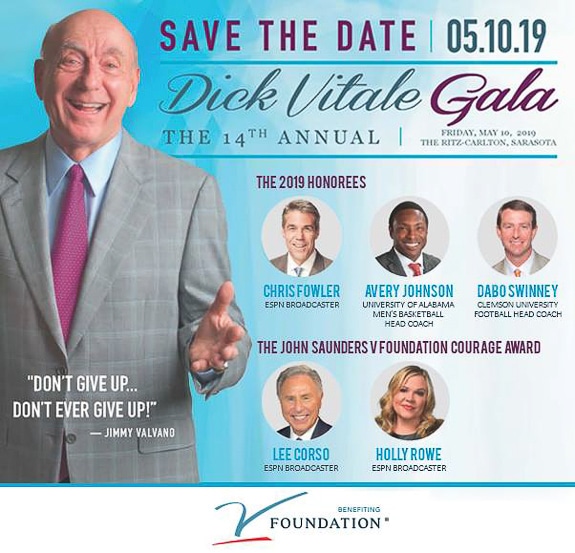 Yearly, the Dick Vitale Gala benefiting the V Foundation, raises millions of dollar for pediatric cancer research. This year’s event will take place on May 10 at The Ritz-Carlton, Sarasota. In his usual enthusiastic style, Dick rejoices in the difference the V Foundation makes and is confident they will surpass last year’s goal and raise a whopping $4 million. With an expected attendance of over 900 people it is one of the largest charitable events held in Sarasota. Invited honorees include ESPN broadcasters Holly Rowe and Chris Fowler, and Clemson University Head Coach Dabo Swinney among other notables.

As Dick Vitale talked about the last time he visited Tony Colton in the hospital he recalled his final words to him, “Keep doing what you’re doing, Dick.” And to Dick Vitale that battle cry will continue to propel his humanitarian and philanthropic ventures. He would like his hometown of Sarasota to come out strong in support of the fight against pediatric cancer. He has coached a lot of teams but is sure that Team Sarasota is going to raise more money this year than last. If you would like to join Dick in the fight to save every child battling pediatric cancer, consider making a donation to the V Foundation or attending the star-studded gala.