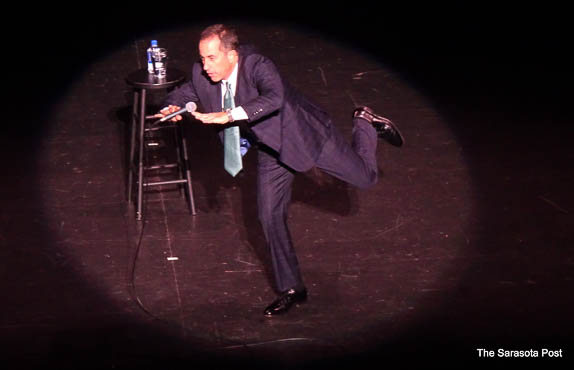 First of all, I have to start out by telling you, the reader of this article, that I am a die-hard Seinfeld fan. Yes, I have seen all the Seinfeld episodes and all the Comedians in Cars Getting Coffee as well as many of Jerry’s stand-up specials and movies. Yes, I belong to Seinfeld Facebook groups and I follow Jerry and his wife Jessica on social media. Yes, I am biased when it comes to Seinfeld. Maybe because I love New York and Jerry IS New York! I spent years staying home on Thursday nights in the 90’s to watch “my show”! You will not get a negative review here. I even own Jerry’s SeinLanguage book that was a New York Times best seller back in 1993. I brought the book along hoping I could try to get it signed after the show. Yes, a total Seinfeld nerd.

I just missed seeing Jerry by a day on my recent vacation to Las Vegas. He was appearing at Caesars Palace Colosseum. He plays there several times a year as well as continues to tour on a regular basis. He had several dates in Florida including the two shows at the Van Wezel Performing Arts Center. Sarasota loves Jerry! The 7 o’clock show sold out fast and another show was quickly added. I was thrilled for that since I wanted to see my fav comedian in my hometown and I got a ticket to the 2nd later show. 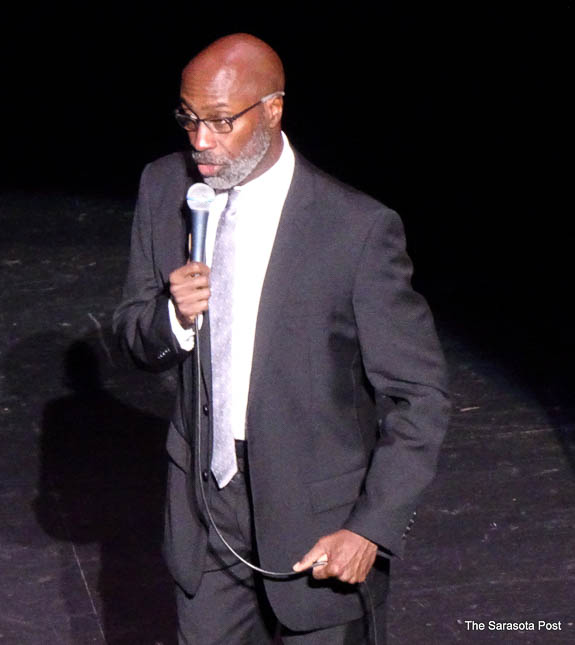 Arriving at the Van Wezel traffic was at a high with the early show leaving and the later show arrivals, but it smoothed out. Walking into the theater, the great voice of Tony Bennett filled the air. “New York, New York” plays just before the show starts and puts everyone in the mood. Comedian Mario Joyner opened the show with his warm-up for about 20 minutes. Pittsburgh born Joyner has been around the comedy scene since the early 80’s and has done extensive work with both Chris Rock and Jerry. He appeared on Seinfeld and Everybody Hates Chris. He is also on an episode of Jerry’s Comedians in Cars getting Coffee.

Jerry appeared to a highly enthusiastic late audience. His humorous observations about life situations had the audience around me in stitches. Speaking of the audience, it was a mix of the Sarasota crowd both young & old and even local resident celebrity talk show host Jerry Springer was in attendance. Seinfeld talked about everything from Las Vegas buffets to marriage to cell phones, “Oh my god where is my phone?” Hilarious truth everyone knew they had said themselves. He commented on the fact that he had been in the area for a couple of days and enjoyed checking out Sarasota and was aware of the red tide situation in our town. He and Joyner both joked about the name “Van Weasel” for a theater.

n response to some fans yelling at him about his current show, Comedians in Cars Getting Coffee (or the acronym “CCC” for those who are in the Seinfeld know), Jerry said when he is finished with the Florida shows he is headed to L.A. to film some more episodes of the hit internet show. He also said it takes him a long time to make them. All the episodes of CCC are currently seen on Netflix as well as Jerry’s stand-up specials. The classic Seinfeld episodes are all exclusively on Hulu as well as still a staple on television on the TBS channel.

Jerry at 64 is comfortable in his own skin at this point in his life and career. His humor is real and true of life in America. There was no political humor at all and no need for it, Jerry is too busy pointing out the human condition and talking about raisins! A great feel good belly-laughing evening! As soon as the show was over I raced out to the stage door hoping to get my book signed. I found a couple other Seinfeld freaks waiting for him but Jerry had already left the building. Hopefully he will come back to Sarasota and I will get to go to another show and try again for that bucket list meeting with Jerry! In the meantime, there are plenty of “my shows” as Jerry says to binge watch until we meet again!

Photos courtesy of Vicky Sullivan / Rock the Lens Photography from a 2016 show.