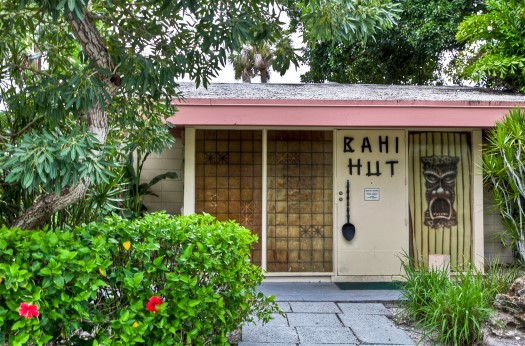 “On Sarasota’s famous North Trail you’ve got. The intimate. Spot to meet. The Bahi Hut. Dadadada…”

In 1954, the Bahi Hut was born, and this jingle was on the radio then. And it’s on the radio now (WKXY 930 AM), some 63 years later. All’s I know is that the jingle is a classic and it works, because it’s been stuck in my head for over 35 years! You’ve been warned.

I stopped in to the Bahi Hut on a Saturday night around 7 pm and there were only a handful of folks drinking Mai Tais at the bar. Which was different, because the times I was there previously (70’s, 80’s, 90’s), it was packed. But other than that, the place had barely changed. I love it when you can say, in this fast-paced world, “some things never change.”

The solid rock and worm-wood walls accented with soft lights and masks, still there, and the dimly lit, Tiki-cave vibe still soothing and inviting. The Polynesian masks and ornaments decorating the walls, and 50’s art, still there, with a few new interesting artifacts added. It’s a place that’s intimate and quiet, where you can settle in to good conversation, a rarity in a lot of bars. 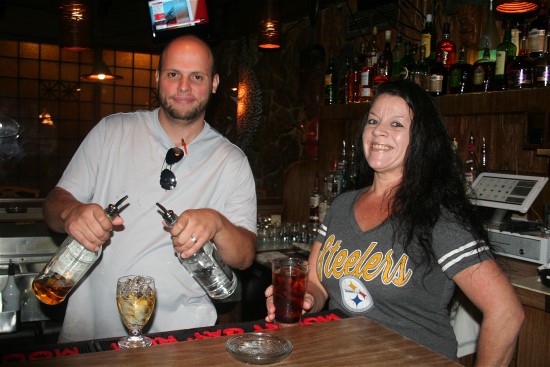 My date and I ordered the required drink for the first-of-the-evening buzz. The magic Mai Tai. And the GM told me he’d have to kill me if he gave me the recipe…so it remains a mystery as to what’s in it. Tales say it’s got seven types of rum. And some kind of red fruit juice it seems. I can tell you even the skewered pineapple packs a punch…let it marinate awhile. The Sneaky Tiki is another of the Bahi Hut’s tropical specialties, a bit more sweet than the Mai Tai. Even if you’re a beer drinker or not into the exotic drink, there’s something about an authentic tiki bar that makes you want to have tropical drinks and plan a vacation…or pretend you’re somewhere on a tiny island, sitting in its only tiki bar… at least that’s what we did half way through the drink.

I was impressed when the server brought complementary pretzels. When was the last time that happened in a club?! It was probably at the Bahi Hut 20 years or more ago – for me anyway.

“People come here and talk about the memories,” Jim Beck, the General Manager of the Golden Host and Bahi Hut said. He’s seen many a men come in as just old enough to drink and now are in wheelchairs he said. He also told me that the Bahi Hut is the second oldest Tiki bar in the country. And there are 32 countries with a Bahi Hut Club. A little trivia for you. 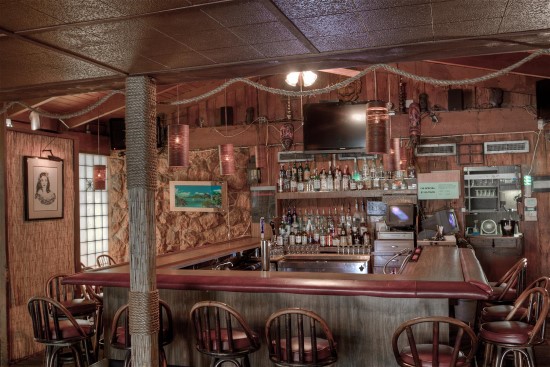 And I pondered, ‘what makes a Tiki bar a Tiki bar?’ “It’s the Polynesian and tropical drinks and the ambience,” Jim said. Just for the record, Wikipedia says: “A Tiki bar is an exotic-themed drinking establishment that serves elaborate cocktails, especially rum-based mixed drinks such as the mai tai and zombie cocktail. Tiki bars are aesthetically defined by their Tiki culture décor which is based upon a romanticized conception of tropical cultures, most commonly Polynesian.”

I have some fond memories of the Hut, but they’re foggy. Not suitable for discussion here. Or too long a tale to go into at this moment. But I will tell you I introduced two of my friends there for a blind date. They had Mai Tais. Made an evening of it. And are still together this day.

So if you’re looking for a place to start a romance. A different spot to start your evening out. Are intrigued about the effects of a Mai Tai. And/or want an exotic, yummy cocktail for $7.95, go to the Bye-Bye Hut…my affectionate name for this club…(relating to how the Mai Tais can hit you if you have more than one). There’s a two-drink limit on them by the way. Cheers.

20
2017-12-11
Previous Post: Is Allman Brothers Guitarist, Dickey Betts Coming out of Retirement to go on tour?
Next Post: Dynamite Dulcimer Jam at Fogartyville in Sarasota