You are viewing: The Suncoast Post > Blog > Ringling Brothers and Barnum and Bailey Circus- The End of an Era? Ringling Brothers and Barnum and Bailey Circus- The End of an Era?

This past month, an American Icon became a part of American History, with the final performance of the Ringling Brothers and Barnum and Bailey Circus. As I watched the show live on YouTube, I got a phone call from my daughter in Texas who was also watching. She was on the verge of tears as she told me how sad it was for her that she would not be able to take her children to see a Ringling Brothers Circus. 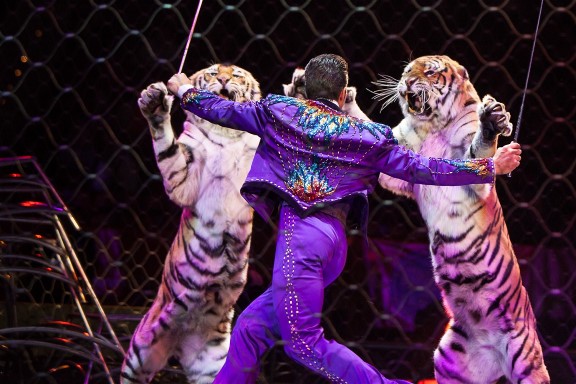 They would have no reference point when she tells them her childhood stories of watching the circus come to life, year after year. You see, I was a small part of the Greatest Show on Earth for nearly a decade. I worked for Haganbeck-Wallace, a division of Feld Entertainment that builds all the sets and props for Ringling Brothers. The first show I worked on was the 135th Blue Unit. Although I didn’t realize it at the time I found myself part of a most unique family, almost a subculture if you will, that is the Circus. As I watched the final show that was held at the Nassau Coliseum on Long Island, I couldn’t stop thinking of being in that exact same arena every March, refurbishing the show before it would open in Madison Square Garden. We would work on the props in between performances and during the overnight hours. The memories flowed alongside tears of nostalgic pride.

One evening at the Coliseum, after the show had wrapped up, a handful of us were working beside the long corridor that led down to the loading dock where the elephants got a nice bath after every show. I could hear them moving past us on their way back to the stable area. They sounded like old men wearing slippers, slowly shuffling along the concrete floor. There I was, standing next to my work table when all of a sudden I felt something reach between my legs, press against my stomach and lift me up high in the air. It was a single, fluid movement. I hear someone yelling in Russian as I was ever so gently set back down. It happened so fast and so effortlessly I didn’t even realize what was going on until after it was over. On their way back from their bath one of the elephants decided to reach down and scoop me up with its trunk. The trainer tried to explain to me in broken english that he must have mistaken me for a performer, since I was about the same size as most of the dancers the elephants work with. I had always had an immense respect for the power of these gentle creatures, but after that I was in awe.

Circus life is family life. There were times I had to take one or both of my girls to work with me, something that was viewed as normal life in the circus and it was a welcomed perk for this single mom. My youngest daugther China reminded me of one such occasion. We were backstage in Tampa for the Red Unit. Rehearsal was always frantic, props and costumes are constantly being modified and reworked as the performers dial in the new show. We were often shorthanded and this particular day the designer, the renowned Eduardo Sicangco, was frantically handling a hundred things at once. He looked at China, who was all but 11 at the time, and asked her who she belonged to. Shyly, she pointed at me. He asked me if she could handle a glue gun and before I could even answer, he had sat her down at the table, handing her a fabulous feather headpiece, a box with thousands of assorted sized crystals and a hot glue gun. She enthusiastically glued Swarovski crystals to head pieces for the rest of the day. On opening night, the dancers came out onto the floor riding elephants with elaborate jewel encrusted feather head pieces. China looked over at me with a big smile and said “I helped make those”. I know how she felt, because I felt the exact same way every time a show would open. I got to see all the things we created in the shop come to life. There is really no other feeling in the world than to realize you were a small part of something so big, with such a long and rich history. Of all the performers I got to meet over the years, probably the most dynamic was Bello Nock. A native of Sarasota, he was born into the circus tradition. The daredevil clown was part of the Red Unit during my tenure. Whenever he would come into the shop or I saw him backstage during rehearsals,  he was always cordial and funny and went out of his way to recognize the work we were doing behind the scenes. He was one of my favorite performers to watch rehearse backstage, his talents far-reaching. Part clown, part performer, he can sing and dance, walk the high wire and perform acrobatics. My personal favorite was watching him practice on the Wheel of Steel (aka the Wheel of Death). 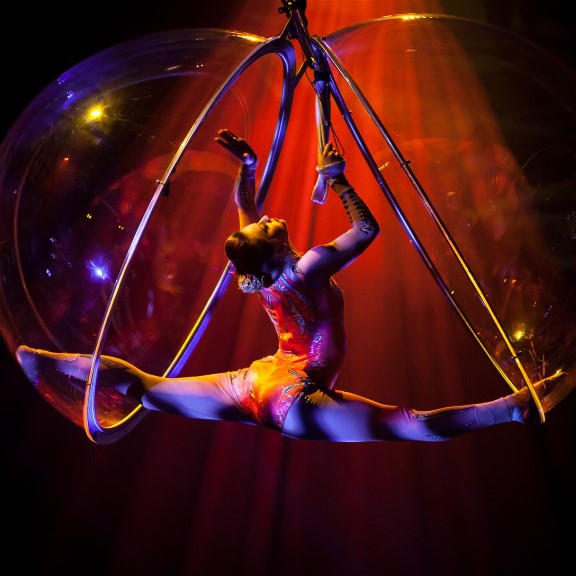 As I come to grips with the end of Ringling Brothers and Barnum and Bailey, I was thrilled to see that Bello is carrying on the circus tradition in conjunction with Feld Entertainment and the Ringling Museum this summer. With that news came the realization that elements of Ringling Brothers will remain with us, hopefully for generations to come. Though my grandchildren will never see The Greatest Show on Earth, China can take them to see these smaller Circuses, many of which are former Ringling acts, and there she can share her stories of when “grandma ran off and joined the circus”. You can catch IncrediBello! from June 13 to July 29 at the Asolo Repertory Theater right here in Sarasota. For ticket information call 941-358-3180 or visit www.ringling.org Sting – An Englishman at the Seminole Tampa Hard Rock